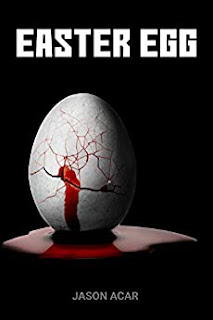 I always thought that an Easter Egg was a yummy chocolate gift that you gave at Easter time, I had no clue that it can also be an unexpected or undocumented feature in a piece of computer software or on a DVD, included as a joke or bonus feature. It's exactly this type of Easter Egg that video game junkie Denver Collins stumbles upon in Jason Acar's exceptional debut novel entitled, yes you guessed it, Easter Egg.

At first Denver is impressed with the seemingly innocent real life video that he's uncovered within his latest game, that is until he finds out that his in-game actions have actually been carried out in reality.

Rick Sorano, is the head of the Cyber Crime Department and along with his colleague Detective Jane Dover, they waste no time going to chat with a somewhat distressed Denver to see what other information they can gather from him about this heinous crime. Things then start to ramp up and Sorano finds himself more involved with this sadastic killer than he could ever have imagined.


Easter Egg is a relatively short book that I devoured in one sitting but don't be fooled into thinking that just because it's smaller it might be lacking in area's such as character development or plot, as I can assure you that it's not. William Shakespeare once wrote "Though she be but little, she is fierce" and that's exactly what I thought about this book. It's dark, it's gritty, it's certainly not for the faint-hearted and I loved it!. Although it is predominantly a crime / psychological thriller, I think there is also a hint of horror too as it brought to mind the Saw films and I could hear Jigsaw in my head saying "Do you want to play a game?" Acar has paced this book perfectly, the tension is palpable throughout and I honestly can't wait to read another book from this adept author.

If you like your killers to be on the depraved side then I would definitely recommend this little beauty and I'm pretty confident that you won't be disappointed. Go and grab yourself a copy - I dare you!

With kind thanks to the author Jason Acar for the review copy.