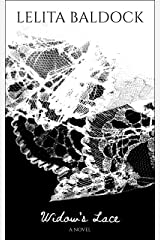 After hosting Lelita Baldock here on The Hippo as part of The Hippo Hangs Out feature back in April I simply had to read her debut novel, Widow's Lace. If you missed the feature you can read it here.

Widow's Lace is an historical fiction / mystery / dual time thriller which follows a young PhD student called Ellie Cannon, as she conducts her research for her thesis on 'The Fall', one of the last known poems by Edward Barrington, written before he mysteriously disappeared.

Ellie has lost her mojo and is struggling to muster up any enthusiasm for writing her thesis, but then a body is discovered at Finniss River. She knows that this is the place where Barrington was last seen over 130 years ago, and it's this that reignites her fire for her thesis. Ellie heads off to Hathrone Farm, the former home of Edward and his wife Rosalind, with a renewed passion.

Widow's Lace is an outstanding debut novel which I read in one sitting. The descriptions of Australia were beautifully written and so vivid I could have been there, hearing the insects and feeling the oppressive heat on my skin. Every transition between timeframe and protaganist was done with flair and without losing any focus, enabling the story to flow effortlessly. Lelita kept me engrossed even further by the fact that each timeframe ended with a well placed cliffhanger encouraging me to read on faster and faster.

With an excellent and well-rounded cast of characters, I found myself to be fully immersed in the lives of all of them but I have to confess that it was the enigma of Rosalind that truly captivated me. Why was she so secretive, what secret was she hiding even all these years later? When I did finally discover the missing part of the story I was genuinely left open mouthed.

With all the references to Edward's poem 'The Fall' I resisted the temptation to look it up on the internet and so it was a lovely surprise to find the poem in it's entirety at the end of the novel. It made, for me, the perfect ending to a fantastic read.

Lelita has set the bar high for herself with her first novel and I can't wait to read more from this talented author.

You can download your very own copy for free from today until Sunday.


With kind thanks to author Lelita Baldock for my review copy.
Posted by Neats at 06:30