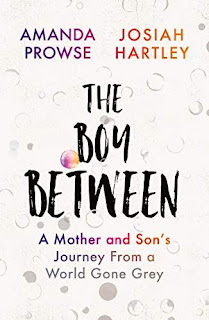 Bestselling novelist Amanda Prowse knew how to resolve a fictional family crisis. But then her son came to her with a real one…

Josiah was nineteen with the world at his feet when things changed. Without warning, the new university student’s mental health deteriorated to the point that he planned his own death. His mother, bestselling author Amanda Prowse, found herself grappling for ways to help him, with no clear sense of where that could be found. This is the book they wish had been there for them during those dark times.

Josiah’s situation is not unusual: the statistics on student mental health are terrifying. And he was not the only one suffering; his family was also hijacked by his illness, watching him struggle and fearing the day he might succeed in taking his life.

In this book, Josiah and Amanda hope to give a voice to those who suffer, and to show them that help can be found. It is Josiah’s raw, at times bleak, sometimes humorous, but always honest account of what it is like to live with depression. It is Amanda’s heart-rending account of her pain at watching him suffer, speaking from the heart about a mother’s love for her child.

I'm used to being moved to tears by the characters in an Amanda Prowse book, but the ones in The Boy Between had a much deeper affect on me because they're not just characters, they're real people as you can see from the above book blurb.

This is an enormously courageous book written by both Amanda and her son, Josiah - known as Josh, about a family dealing with depression. We're given a very personal insight into their lives, from Josh's birth through to him attending university and planning to take his own life at the tender age of just nineteen. We get to follow both sides of the story as they share their feelings, warts and all - Josh's uncertainty about his feelings and wishing that everyone would just let him stay in bed and Amanda's struggle to cope with the changes in her beloved son, trying to do what she thinks is best for him, but not knowing that she could possibly be unintentionally adding to his emotional issues. I can't begin to imagine what it must have been like to re-live these times during the writing process.

My mum and I met Amanda and her husband, Simeon, at a local book festival several years ago and on the way home we talked about how friendly and gregarious they both were. It wasn't until after I finished reading this book that I realised we had met them at possibly one of the worst times of their lives but we had absolutely no idea what they were going through. It brought to mind the saying that you never know what people are going through and sometimes the people with the biggest smiles are struggling the most. This was certainly the case on that particular day and now, in hindsight, that day is tinged with a little sadness.

This book very deftly deals with a subject that some people would rather sweep under the metaphorical carpet and I think that a lot of the time this is because they don't understand it. Why would someone, who outwardly has everything going for them - good job, nice home, loving family etc - have any reason to be depressed? Sadly mental health issues are significantly more complicated than that and help doesn't come in a 'one size fits all' form as what works for one person may not work for another. According to the mental health charity MIND, one in four people will experience a mental health problem of some kind each year in England and over the course of someone's lifetime one in five people have suicidal thoughts. That's some food for thought isn't it?

The Boy Between is a truly heart-wrenching book to read, but one which could be instrumental in helping others, raising awareness and encouraging conversations about a topic that should no longer be classed as taboo.

Finally, I'd like to send lots of love to Josh, Amanda and Simeon. The love that you and your family share shines out like a beacon in this book and thank you for sharing your story so candidly in an attempt to help others.

A keen environmentalist and animal lover, Josiah (Josh) Hartley lives in a remote farmhouse in the West Country with his two idle and arrogant French Bulldogs, Dottie and Beau. Happiest following the music scene in Bristol, at a festival or watching rugby with his mates, Josh enjoys the outdoor life and often heads to the sea to surf and sit on the beach watching the sun go down.

After a stint at the University of Southampton, another at the University of Bristol and one planned suicide, Josh decided to write about his descent into mental illness and the depression that held him in its grip for the past few years. The Boy Between carries the overriding message that things can and often do get better. It is a book of reflection, raw, honest and full of hope - the proof being that Josh is still here and excited about what comes next. He’s ready to catch any opportunity that life throws his way; quite a thing for someone who only a few years ago was living in a world gone grey, ready to disappear from the face of the earth…

Amanda Prowse is an International Bestselling author whose twenty five novels and seven novellas have been published in dozens of languages around the world. Published by Lake Union, Amanda is the most prolific writer of bestselling contemporary fiction in the UK today; her titles also consistently score the highest online review approval ratings across several genres.  Her books, including the chart topping No.1 titles 'What Have I Done?', 'Perfect Daughter', 'My Husband's Wife', 'The Girl in the Corner' and ‘The Things I Know’ have sold millions of copies across the globe.

A popular TV and radio personality, Amanda is a regular panellist on Channel 5's 'The Jeremy Vine Show' and numerous daytime ITV programmes. She also makes countless guest appearances on BBC national independent Radio stations including LBC and Talk FM, where she is well known for her insightful observations and her infectious humour. Described by the Daily Mail as ‘The queen of family drama’ Amanda’s novel, 'A Mother's Story' won the coveted Sainsbury's eBook of the year Award while 'Perfect Daughter' was selected as a World Book Night title in 2016.

Amanda's ambition is to create stories that keep people from turning the bedside lamp off at night, great characters that ensure you take every step with them and tales that fill your head so you can't possibly read another book until the memory fades... 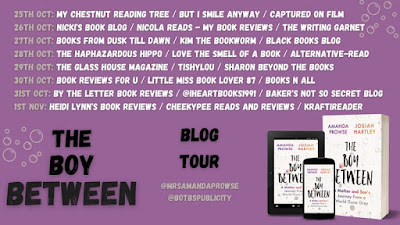 With kind thanks to Sarah Hardy for my review copy and stop on the blog tour.