Blog Tour - A Prayer For The Broken - Mark Tilbury 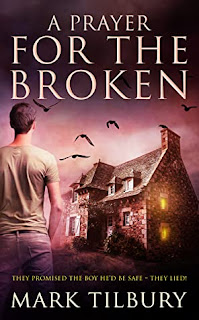 I finished reading A Prayer For The Broken several weeks ago now, I'm still thinking about the characters all these weeks later and I think that they will stay with me for a long time to come.

Eleven-year-old John McCormack hasn't had the best of starts in life and when we first meet him things are about to get a whole lot worse! He's been living in a temporary foster home with the Johnston's but a permanent home has been found for him at Clearwater House with Pastor Stone and his family. Right from the start things aren't right. These were the people who has been entrusted to look after John but their idea of care was a far cry from any definition of the word that I've ever seen - quite the opposite in fact.

Pastor Stone is a highly respected member of the local community but behind closed doors to say that he's evil would be an understatement, a bit like calling Adolf Hitler a saint. Thank goodness that John has a boy called Brendan for company. Brendan is able to give John a head's up on certain things in the Stone household to try and keep his new friend out of trouble but nothing could prepare these two innocent boys for the horrors that were to come.

Being one of my 'go-to' authors I never read the blurb of Mark Tilbury's books anymore so I went into A Prayer For The Broken completely blind and by the end of the first chapter I couldn't believe what I'd just read. I was so angry I had to put my kindle down and vent out loud at how much I already hated Pastor Stone - if only I knew how much more there was to come!

I found this to be a very difficult book to read in places and I could feel my heart breaking for John and Brendan as I followed their struggle against Stone, it even brought tears to my eyes at one point. I honestly couldn't put it down as I desperately needed to know how the story ended. There have been a couple of characters in Mark's previous books ( Detective Carter in The Abattoir of Dreams and Daryl Finch in The Key To Death's Door) who have made my skin crawl but Pastor Stone is by far the most odious character EVER! I'll be the first to admit that I quite enjoy having having a character to dislike - but this guy was off the scale! Just thinking about him again while I'm writing this is making my skin itch and I'm shuddering!!! 😨

When I read the last page I took a deep breath to gather my thoughts and think about the journey I'd been taken on  - it felt like going to hell in a handcart but I enjoyed every page of the ride in a perverse kind of way. That said I'll still be at the front of the queue when Mark's next book comes out, assuming I'm out of therapy by then!

Mark Tilbury never ceases to amaze me with his books, which always seem to get better and better the more he writes and each one is always darker, more twisted and depraved than the one before. A Prayer For The Broken is an absolutely phemonenal book and all I can say is -  Watch out Stephen King as Mark "Twisted" Tilbury is coming for your crown!

With kind thanks to author Mark Tilbury for my review copy.