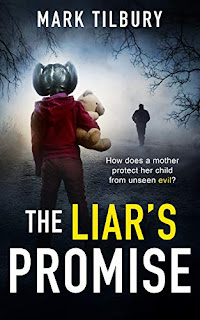 I'm back to shout about another fabulous book by the master of twisted himself - AKA Mark Tilbury. Mark's book are being re-launched and given stunning new covers and today's book is The Liar's Promise. I read this book back in December of 2017 and below is my review which first appeared here on The Hippo as part of the blog tour.

When Mel takes her four year old daughter Chloe to the local theatre, she is stunned when Chloe starts screaming, refusing to go any further than the foyer because she's afraid of the 'Tall Man' and she doesn't want to die. Nothing will calm her down so Mel takes her home, manages to calm her daughter down and settle her into bed, but this unsettling incident is just the beginning of a very eventful night!

Over the course of the next few days Chloe's behaviour changes dramatically, she draws pictures, talks about horrific events in the first person and makes frequent references to the 'Tall Man' who is coming to kill them.

Not knowing who to turn to she decides to talk to Charles Honeywell, the headmaster at the school where she works, unaware that he is very closely connected to the events that her daughter is talking about and by speaking to him about it she has potentially made the situation a whole lot worse.

I won't tell you any more about the plot but what I will say is that I'm pretty sure that you won't be able to put this book down, I know I couldn't!

After I read The Abattoir of Dreams I knew that Mark Tilbury was a talented author who was capable of freaking me out with his writing but I had no idea just how far he could get under my skin, and he did just that with The Liar's Promise. This book was so creepy I was convinced that I was going to have nightmares each night as I was reading it before turning off the light and snuggling down under my duvet. All sorts of disturbing images were flying around my head, the Tall Man, an innocent looking child's doll, an array of coloured freezers. . . . . nope, I'm not going back there again as I've only just managed to get the images out of my head.

I absolutely loved this book, despite the fact that it freaked me out so much, which is a testament to the author's writing. It's a fast-paced book that will drag you kicking and screaming to places that you never want to go, it's gruesome, it's sick, it's twisted, it's dark, it's disturbing and I can't wait to see what comes next from this outstanding author!

Wow, even just reading through that review again is bringing back memories and images from the book that I thought I had forgotten - especially the coloured freezers!! OMG, those freezers!! 😱

If you haven't read any of Mark's books I think you need to rectify that, sooner, rather than later, as you're missing out on some truly amazing books, in my humble opinion. If you need another incentive to read it, it's currently available to download for only 99p.

You can check out the rest of the blitz with these fantastic blogs: 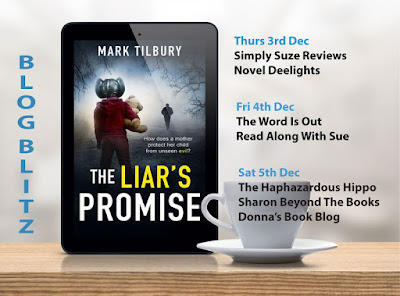