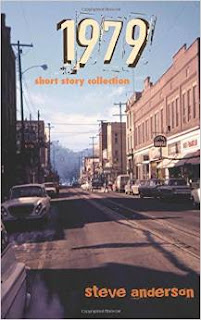 1979: short story collection is an anthology of thirteen coming of age stories set in America.

The protagonist's in each story are experiencing the confusion, angst and exhilaration of adolescence. Each story is a novel in miniature, full of characters that could easily be expanded and developed and written in such a vivid way that I'm sure readers will find themselves being transported back into their own childhoods when they had, or witnessed similar encounters.

The writing is picturesque and despite never having been to America, I felt as if I was there alongside them. Stone Quarry is a particularly good example of this. Seth, Pauly, Dewey and Toad have a sheet of corrugated tin roofing and decide to take it to the top of Chester Hill and use it as a sled. The journey down is a scree field of broken shale so it's not going to be a smooth ride but the boys bravado is greater than their common sense. The description of their perilous downhill journey is full of adrenaline and gives them a great story to tell afterwards.

Steve Anderson has a great ability to get into his young character's heads and capture both their language and observations in exactly the right way. I loved the story of Shelly, drifting around a pool on her lilo, minding her own business and trying to keep her ear dry to prevent another ear infection, when she hears a commotion behind her. Turning round to see what's going on a boy asks if he can use her raft as he "ain't got no legs". The boys request is met with mockery and disbelief that someone would fake a medical condition (when she has a "real" one) just to try and get her lilo  because they were too lazy to swim around. So imagine how she feels when she comes face to face with the same boy later and finds out that he was telling the truth.

All in all I enjoyed reading these stories and they're great if you only have snippets of time to lose yourself in a story. I hope that there are more stories and maybe even a novel in the pipeline.


With kind thanks to Steve Anderson for the review copy.