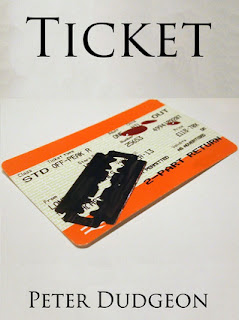 Ticket is another cracking read from Peter Dudgeon, the author of Chance.

This gritty thriller tells the story of Paul Ranson, who has unwittingly become a man wanted for murder after he buys a total stranger a train ticket. Whilst he has no recollection of the crime he soon works out that the police will have no option but choose him as their prime suspect. Suspecting that he was drugged, Paul decides that his best option is to run and try and work out who has set him up.

Over the course of the novel we're introduced to different characters, in various scenarios and varying amounts of time "before the ticket". Some novels that are written in this way can confuse the reader but not this one. The order in which we're introduced to these other characters is done superbly and the author then skillfully pulls all the threads together and neatly combines them to give a satisfying ending.

Although this was a good read I found that I didn't enjoy it as much as his second novel, Chance as I didn't feel the writing was as polished but that, surely, is a testament to how much this author's writing has progressed and that's why I'm looking forward to Peter Dudgeon's next offering "Circle" due out this autumn.