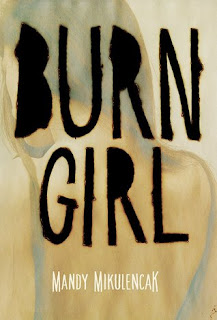 Burn Girl is the story of Arlie who has been physically and mentally scarred after being involved in a meth-lab explosion. Her life so far hasn't been an easy one, her mother's a drug addict, she doesn't know who her father is and she's on the run with her mum from her abusive step-father. When her mum dies of an overdose, Arlie has two choices, call the police or run-away.

Unbeknown to her, she has an uncle called Frank who is willing to take care of her and with his help and her friend Mo she is able to start living the normal life of a teenager, going to school, joining a singing group and finding a boyfriend. Just as Arlie is starting to find her feet she suspects that her step-father, Lloyd has somehow tracked her down and that can only mean trouble.

The idea of this story was a good one but I didn't feel that it was developed as well as it could have been. There were times when I just wanted to shake Arlie and tell her to face up to things instead of running away. Saying that though, I liked the way the author portrayed her friendship with Mo and Cody and the strength Arlie gained from them. I loved Uncle Frank who had his own issues to deal with but was always determined to do the right thing for Arlie and give her a stable home.

Overall this was a good read and I would recommend it for the young adult reader.

With thanks to NetGalley and publishers Albert Whitman & Company for the review copy.