The Lives Between Us - Theresa Rizzo

I have a special guest reviewer on my blog today and I'd like you all to welcome my good friend Sarah Mackins, who has very kindly written a review for me. I "met" Sarah through a Facebook group that I joined about a year or so ago and like myself she's a voracious reader. I'd like to say a big thank you to Sarah for sharing her review and without further ado I'll let Sarah take over with her review of The Lives Between Us. 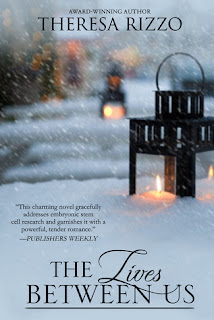 I was pleased to be offered a copy of this free in exchange for an honest review on the basis that I had enjoyed a similar style book.
There are sections I find hard to review without spoilers so I apologise if anything sounds vague.
This book takes on several elements in part in is a romantic story but with an underlying family tragedy and a political battle that bears several viewpoints and medical understanding of the difference between stem cell therapies.
This story is based around Skylar Kendall a journalist who begins this story with a sick niece in need of embryonic stem cell therapy a treatment unavailable due to political opposition by Senator Edward Hastings and because of his opposition Skylar is out to pursue the man and try to make him suffer for his decisions.
Skylar if a formidable journalist who loves her family and will do anything for them but through this love becomes somewhat blinkered to the bigger picture, meanwhile, her sister Faith and brother in law deal with their daughters illness in their own way each bringing about added depth to an already difficult storyline subject.
Regardless of where your own political views stand on the therapies covered by this story it's nice to see the author cover several angles and explain some differences along the way without becoming too wrapped up in medical terminology.
I'm not sure I felt the relationship of Mark and Skylar which is partly why this lost stars in my rating I was much more drawn to the family dynamics of the Hastings family which was much more interesting and better portrayed and the heartache of her sister Faith and her husband. I felt the Skylar / Mark romance storyline lacking somewhat in comparison.
There were twists I saw coming and others that veered off into bigger twists I wasn't expecting though I expected Edward Hastings politics to be tested I hadn't imagined it to unfold quite the way it did and I really enjoyed the medical/political storyline of this story. I loved Noelle's character (Edwards wife) and even though Jeff (their son) was at a rebellious teenage stage of life I really enjoyed seeing his character unfold and the emotional battles of the family as a whole.
The friendship between Edward and Mark left me a little baffled as Mark works in Stem Cell Research and so this surprised me that Edward would be so against the idea, eventually my inner queries were uncovered from background story and it was interesting to find added depth to the politics.
Though I have marked this down I would recommend to readers who like the medical politics of this sort of story but less likely if you are after a romance I think romance readers would find this a bit heavy. Though of course that is just my opinion.
Overall this was well written covering a very difficult subject matter (3.5 stars)