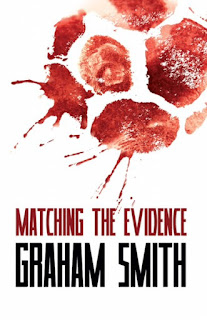 Welcome to my stop on the Matching The Evidence blog tour and I'm delighted to have a guest post by Graham Smith to share with you all today.


Building a Lead – How I Created DI Harry Evans

As a popular question from readers is, “How do you create your characters?” I thought I’d use this guest post to answer that very question and I’ve chosen the main man himself to be my sacrificial lamb.

Before I start, I’m going to look at some of his qualities. Evans drinks too much, smokes too much and drives like the hounds of hell are pursuing him. He’s also very clever, he cares about people he’s never met. An insult or an enquiry about a family member’s well-being are the words most likely to tumble from his lips. He’s irascible, contradictory, lonely, loved and despised in equal measure. There’s no rule he won’t break to get a result, authority means nothing to him unless he’s wielding it and he’s earned a reputation as a fighter by the only means possible.

When I first started thinking about writing Evans I was binge watching Life on Mars in which a modern cop – Sam Tyler - gets transported back to the seventies and has to forget all the advances in policing and societal attitudes. His boss – Gene Hunt – was a complete dinosaur who’d pick a suspect at random and then beat a confession from them.  I loved the idea of the series and decided to do a little role reversal and have my character as the last of the dinosaurs fighting to avoid the meteorite.

Before anyone rolls their eyes or shouts cliché. I’m gonna tell you that I know it’s a cliché. I’m also going to point out clichés exist for reason. Namely they are truisms.

Obviously I wanted to avoid clichedom as much as possible and I had a few ideas on ways to do this. One of the first things I did was give Evans my paternal grandparents’ local knowledge. (They were farmers and on childhood Sundays they’d take me on drive out through the local countryside. Whichever way they went they’d point out farms, houses and businesses and discuss the generations of people who lived, owned or worked in the places they passed.) Gran and Grandad knew everybody and everybody knew them. I wanted Harry Evans to be the same and so I made him that way. This trait in some ways hearkens back to the days of the village bobby who knew all the locals and is a level of policing you often hear being called for again. With Harry Evans, I delivered it to Cumbria.

Another thing I chose to do with Harry was to give him the usual kind of troubled life you’d find in the big bag of clichés about Detective Inspectors. Only I mixed it up in my own twisted way and gave him a reason to feel anger as well as loss. (That was close. I nearly wrote a spoiler there)
To make matters worse for him (And me through a huge lack of foresight) I put him at the tail end of his career, thus threatening to deprive him of the one thing he had left to get up for in the morning.

His language is earthy to say the least and he doesn’t suffer fools gladly. Some of his put-downs are withering to say the least, yet he has a real sense of decency and will always sacrifice his own feelings for the greater good.

He berates his team and has insulting nicknames for them, but he also has their utmost loyalty.

He’s a do-as-I-say-not-as-I-do kind of guy and always will be.

He’s contradictory in every sense of the word. He’s a cop who is on friendly speaking terms with the local gangster family. He spends his days breaking procedural rules and his nights reading crime novels looking for procedural errors he can inform the authors’ about.

Most of all, he’s loyal to those he cares about, to the people of Cumbria he’s paid to protect and regardless of who else is there, DI Harry Evans is the smartest person in the room.


If that's made you want to get your hands on a copy of Matching The Evidence you can do just that right here!

You can find out more about Graham Smith and his other books which include The Major Crimes Team and Snatched From Home by clicking here.

Make sure you follow the rest of this blog tour on the other brilliant blogs below. 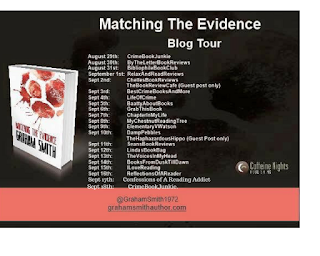 With kind thanks to the lovely Noelle Holten of CrimeBook Junkie fame for organising the tour and to author Graham Smith for writing a great guest post. I'll certainly be taking a closer look at your books after this.