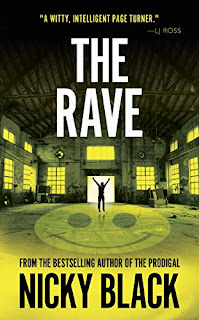 The Rave is a brutal and accurate portrayal of life in the late 1980's which makes for an addictive read.

It's said that life up north is grim and that's exactly how it's portrayed in The Rave. With high unemployment, drugs, dodgy dealing and raves - The Valley Park Estate has a diverse community of characters.

Tommy Collins certainly hasn't had it easy, but he's one of the few who is looking to better himself, earn himself some money and get away from the estate with his wife and young daughter. Organising raves is the way forward in Tommy's eyes but there's always going to be someone else who wants a piece of the action and has ulterior motives for wanting to be involved.

DCI Peach is a single parent to Sally and when he finds himself praying for his daughter's life he holds Tommy personally responsible and is hell-bent on making him pay for what he's sure is Tommy's fault.

Paul Smart is the top-dog on the estate and everyone knows that you don't mess with him so why does Tommy get involved way over his head with this despicable character?

This isn't a depressing and bleak tale though, far from it. It's a fascinating glimpse into life during a challenging era that took me through a whole host of emotions. Nicky Black has a wonderful way with words and it almost felt like I was watching a fly on the wall documentary, following the lives of the residents of the estate, experiencing the highs, as well as the lows, but unable to look away when the going got tough.

The Rave is a gritty read that pulls no punches and had me completely hooked from the first page.

With kind thanks to author NIcky Black for the review copy.