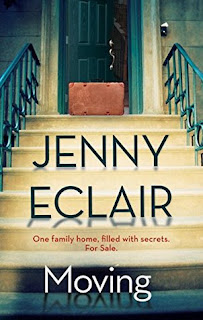 Moving is the fourth novel by English comedian, author and actor Jenny Eclair. It's a novel about the intricacies of family life told from three different perspectives.

Edwina Spinner has lived at 137 Kennington road for over fifty years but she's now coming to realise that it's far too big for a woman of her age to be rattling around in and she's decided it's time to sell up and move on. As Edwina is showing the estate agent around her home her story is revealed a little more with each room that they enter. She's been married twice and has a step-son as well as her own twins, but where are they now and how has she ended up alone?

The rest of Edwina's story is ingeniously told through the eyes of Fern Woolbright an eighteen year old student and Edwina's step-son Lucas. It's a story of heartbreak, jealousy, lies and secrets. Who is hiding what from who and why?

I really enjoyed reading this book. Edwina's character was beautifully written revealing a complex but warm character who I felt genuine empathy for. At first I wondered who Fern was but I soon understood her relevance to Edwina and the story continued along well. The story through the eyes of her step-son was the final part which pulled the whole novel together well. Initially Lucas was quite a churlish character and it took me a while to warm to him but at the end you realise that his intentions are good and that just because he can't right his previous wrongs there is still one last thing he can do to make amends.

I haven't read any of Jenny Eclair's previous novels but after reading this one I'd be more than happy to curl up with one of her other three.

With kind thanks to NetGalley and publishers Little, Brown Book Group for the review copy.