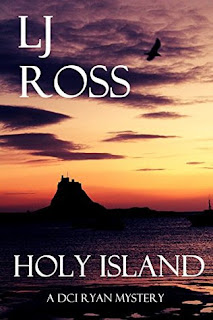 Holy Island is the debut novel from LJ Ross and the first outing for DCI Ryan.

The novel starts with the discovery of the body of Lucy Mathieson and the re-instatement of DCI Ryan who has been living on Lindisfarne following a leave of absence. Being that the island is cut off from the mainland due the the tides at the time of the murder this should be an easy case to solve but then two more bodies are discovered.

Due to the potential pagan links of Lucy's murder Dr Anna Taylor, a university professor specialising in pagan rituals, is called in to help Ryan solve the crime. Anna is a former resident of the island but after a falling out with her sister eight years previously this is her first time back.

Ryan is dubious about the doctors arrival as he's expecting a middle-aged man so he's pleasantly surprised when he meets the young and attractive Anna and it's not long before the sparks are flying between them.

There are some brilliant twists in this book and I found myself questioning the motives of several of the characters, only to read on and find out that it couldn't possibly be them.

Ross has written an impressive debut novel packed full of intriguing and believable characters. Along with this the descriptions and history of the area were so wonderfully written I want to visit it for myself. Without giving too much away the ending is a good one which sets it up nicely for the next novel in the series, Sycamore Gap which is available now and I for one, can't wait to catch up with DCI Ryan again.