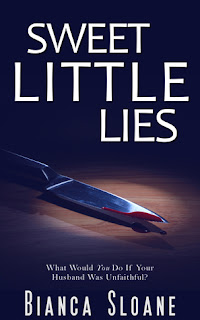 Sweet Little Lies is another fabulous roller coaster of a read from Bianca Sloane.

What would you do if you found out your husband had been unfaithful?

Divorce him? Take him back?

Kelly chose option three for her husband Mark and it's on the day that she kills him that we first meet her. Kelly is a former supermodel who now has her own cosmetics company, her husband Mark  is a highly successful sports lawyer and they are besotted with each other, so why would Mark be unfaithful?

After killing Mark, Kelly flees the scene but it's not long until the police are on her tail and we follow Kelly as she tries to unravel Mark's secrets while at the same time playing a dangerous game of cat and mouse with Detective Bill Hanson.

Bianca Sloane is one hell of a story teller. I know that everytime I pick up one of her novels I'm going to be rendered useless until I've got to the end and this one is no exception. Ms Sloane has perfectly portrayed Kelly as a woman scorned and the lengths she will go to to protect herself as well as friends and family until she finds out the truth. This is another fast paced thriller that will have you racing to reach the end and I can't wait for the next novel.

With kind thanks to author Bianca Sloane for the review copy.