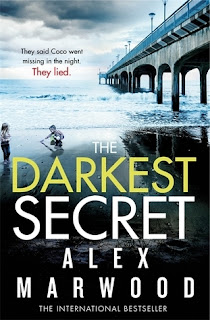 The Darkest Secret is a dual time novel telling the story of the build up and aftermath of when three-year-old identical twin Coco goes missing.

Sean Jackson has been married several times so his family is a complicated one, but nevertheless they've agreed to meet up for the weekend of his 50th birthday along with friends and their children. The celebrations come to an abrupt end though when Coco disappears.

Fast forward ten years and Sean has died and the dysfunctional family and friends are attending his funeral. Mila has lost contact with family members over the years but she finds herself unable to turn down her former stepmother's request to take her daughter Ruby, Coco's surviving twin, to their father's funeral.

Initially I had trouble getting to grips with this book as I had trouble differentiating between all the different characters and I can honestly say that I've never met so many narcissist's in one novel before. I carried on though and once I got to grips with all the different people I felt a compulsion to keep reading so that I could find out what happened to little Coco and finally put her to rest, something which some of the characters seemed to be able to do easier than others.

The Darkest Secret is a well written and well constructed book but sadly it just wasn't for me.

With kind thanks to NetGalley and publishers Sphere for the review copy.