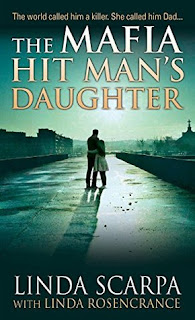 The Mafia Hit Man's Daughter is the memoirs of Linda Scarpa whose father was Gregory Scarpa, a made man in the Columbo crime family and known as "The Grim Reaper".

Right from the outset this book pulls no punches, opening with Linda almost being sexually assaulted by the driver who was supposed to be taking her to school.

As a young child Linda grew up thinking a mild-mannered man named Charlie Schiro was her dad, and that “Greggy” was just a friend of the family. It was only as a teenager that she learnt the truth: Her mother was Greg Scarpa’s mistress, and Linda and her brother Joey were his children. Her father was a legendary character who didn't think twice about discussing murder plots and shootouts in front of his children and Linda lived in fear of telling him things in case there were repercussions.

This was an insightful glimpse into life growing up in a family with mafia connections as well as an absorbing tale of love and betrayal. Although I enjoyed reading it I found myself sometimes confused as the events being recounted weren't always in chronological order. Saying that though, if you have an interest in stories relating to members of the Mafia and their lifestyle then this could be a book for you. I take my hat off to Linda Scarpa for having the courage to put it down on paper.

The Mafia Hitman's Daughter is published on December 29th and is available for pre-order now here.

With kind thanks to NetGalley and publishers Kensington Books for the review copy.