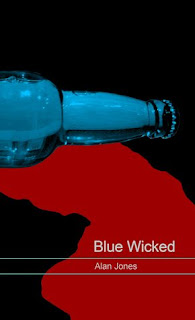 Blue Wicked is not a book for the faint-hearted! I was warned by the author that this was a 'dark and gritty crime story' and he wasn't kidding.

Eddie Henderson is an unusual crime novel protagonist in that he's a vet. He's been looking into some gruesome cat cruelty and it's not long before Eddie suspects that whoever is responsible for torturing and killing the cats has moved on and now it's the drug addicts and alcoholics of Glasgow that have his or her attention.

When he voices his suspicions to the police it's only Catherine Douglas, a young officer, who thinks that he may be onto something and agrees to help him dig deeper.

The story that follows is uncomfortable reading at times but it's all relevant and makes for an original, gritty novel. I could feel myself squirming as I followed the unfortunate victims, a feeling which was made worse as I knew what was coming, whereas they had no idea. The descriptions are so vivid that I almost felt that I was a bystander at the crime scenes and at one point I swear I could smell the bodily functions! Eddie is a great character who stands up for what he believes in and will fight for what he thinks is right so as a result I got right behind him and wanted him to crack the case.

The author works in the animal health industry and it's very clear that he's extremely knowledgeable on this subject but I hate to think what his google search history looks like as there must have been an extensive search of certain aspects. I was wary of the Scottish dialect to start with and did wonder how I would cope with it (there is a helpful glossary at the back of the book if you get really stuck) but I soon found that it wasn't an issue and it added to the authenticity of the book. I can't wait to read more from this author.

If you're looking for an original story and you like your thrillers dark and voyeuristic then this is the book for you.

You can find out more about the author Alan Jones here and Blue Wicked is currently only 99p on Amazon at the time of posting.