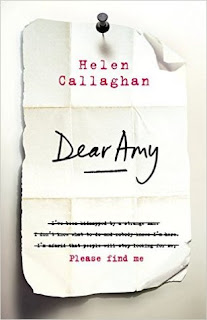 Dear Amy is the agony aunt at The Cambridge Examiner newspaper but in real life Amy is Margot Lewis,  a classics teacher at the local school.

When Margot picks up her post from the Examiners' offices she's disturbed to find a letter from a girl claiming to be Bethan Avery, a young girl who went missing several years ago and is now presumed dead, begging for help as she is still being held captive in a cellar at an unknown location. Margot is deeply troubled by the letter and when Katie, a student at St Hilda's, where she works goes missing, Margot decides to take the letter she received from Bethan to the police. When the police don't believe her Margot decides to take matters into her own hands and try and find the author of the letter herself, then she receives another letter but this one contains information that was never released by the police.

A crime professor called Martin Forrester gets wind of the letters and is keen to help Margot trace the person behind them, are they genuine or is it a sick hoax? Margot is about to embark on a journey that will change her life forever.

After reading the synopsis I was desperate to get my hands on a copy so I was delighted to be accepted for a review copy. Sadly my excitement was short lived, as by the time I was halfway through my interest was starting to fade.  It wasn't the writing that was the problem but the story itself, seemingly little things were bugging me, if the letters were from a girl who was being held captive how was she managing to get a letter to an agony aunt and why wouldn't she write one to the police instead who would obviously be in a better position to help her. I think my problem lies with other psychological thrillers that I've read recently, there have been so many of them and their stories have blindsided me on more than one occasion, whereas this one seemed to lose it's way and become improbable. That said, it was an interesting book and one that I was happy to read until the end.

Helen Callaghan is clearly a proficient writer and I would still recommend this book to fans of this genre as just because it didn't float my boat it doesn't mean that it won't float yours!


With kind thanks to publishers Penguin UK and NetGalley for the review copy.