In The Shadows - Tara Lyons 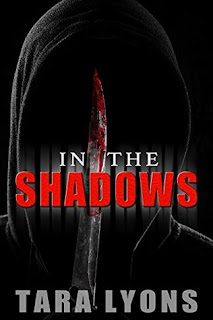 Where do I start with my review of In The Shadows? How about the cover? I love it! Don't you think it screams read me?

I've had this little beauty sitting in my own personal TBR pile since it first came out and I haven't had the chance to read it but a couple of days ago I decided that I couldn't resist it any longer, I was going in!

In the prologue we are with the murderer as they bury their victim and this isn't going to be their only murder.
The body count rises and the police are under more and more pressure to catch the killer, but this is one killer who doesn't plan on getting caught. Never leaving a shred of DNA the police have nothing to go on.

There is a connection between the victims that the police don't know about yet though, Grace Murphy knows them all.

Grace is struggling to come to terms with the loss of her beloved grandfather and her mum is trying her best to help but when the killings start Grace begins to have terrible nightmares. Convinced that she'll be next on the killer's list, her paranoia grows and she turns to alcohol for comfort instead of her mum and friends.

I've been lucky enough to read some really impressive debut novels so far this year and I can honestly say that In The Shadows is another one to add to my list of authors to watch. Tara has written a book that had me gripped by the end of the prologue. The plot was well thought out and there was just the right mix of twists. turns and red herrings to keep the pages quickly turning. I really felt for Grace's character, devastated by her grandfathers death and constantly locking horns with her mum over her drinking and staying out all night without telling her mum where she is, when all her mum wants is to reach out to her daughter.

The chapters are brief but snappy, just the way I like them, as I find that makes the whole book flow nicely and probably why I raced through it in a day. By the last third of the book my pulse was racing and I couldn't believe what I was reading and it left me breathless. If psychological thrillers are your thing then this is a must read book I promise you won't be disappointed, I know I wasn't.