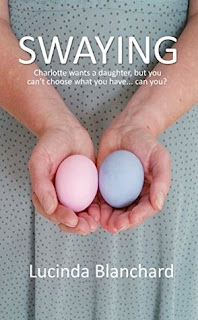 Swaying is the moving story of one woman's fixation to have a baby girl.

Charlotte (Char) is pregnant and is desperately hoping for a little girl, so when baby Luke makes his entrance into the world she's secretly devastated. When she finds an online support group for other mothers who are disappointed with the gender of their babies it opens up a whole new world for her to explore. Topics such as gender disappointment, swaying, diets and what can only be described as diy science experiments quickly become a huge part of Char's day to day life and it's through the forums that she meets Bella, a mum to two boys, who also longs for a daughter.

When her husband Ian agrees to another baby Char's hopes are raised and she manages to convince him to try some of the methods she's researched so that she can hopefully realise her dream of holding Verity-May in her arms.

At first her new friend Bella is someone who Char can depend on for support but gradually it seems that there's something about her that doesn't quite add up and Char is disturbed by the lengths that Bella will go to to ensure that her next baby is a girl. Spending all her time concentrating on how she can fulfil her dream, Char appears to be overlooking the here and now and she finds herself in a situation she never thought possible.

Swaying is a superbly written book about a highly controversial and taboo subject. Lucinda Blanchard has obviously done a lot of research into the subject of swaying and in doing so she's introduced me to a subject that I was totally unaware of. The facts are cleverly combined within the story so that as a reader I was able to fully understand the pressure some woman are prepared to put themselves under to try and guarantee the chosen sex of their unborn child. This was a captivating story with characters that are very easy to relate to, a subject matter that is dealt with sensitively and topped off with a light sprinkling of humour. I was genuinely engrossed by the storyline and I would definitely recommend this thought-provoking read regardless of whether or not you have children and I can't wait to see what's next from this very talented author.