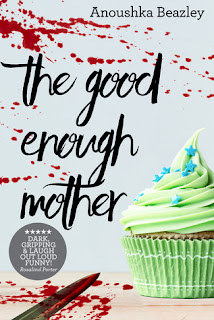 The Good Enough Mother is a fabulous book that had me literally laughing out loud and was quite different to what I was expecting after reading the blurb.

Gatlin - a leafy, affluent town: Chelsea tractors and ladies who lunch. However, all is not as it seems. Drea, a most unnatural mother, struggles to find private school fees for her step-daughter Ava after her boyfriend leaves her for another woman.
Watching the yummy mummies she becomes inspired, hatching a daring and criminal plan...unleashing all hell in the quiet town of Gatlin.
Can Drea survive the fallout and the wrath of the PTA?
A satirical black comedy about love, motherhood and the human condition.

It seems like Drea has always told it like it is and the proof of this is evident from the opening quote from her when she was 9 -‘If you’re happy and you know it, go fuck yourself’  I instantly knew that this was going to be a great book and I was intrigued to find out more about this character.

Drea has been dumped by her boyfriend, but not only has he left her for a younger woman, he's left his teenage daughter Ava with her. Not being the maternal type Drea struggles with being a single parent but soon it's not just her parental skills that are a problem . . . . it's how she's going to pay for Ava's private school fees.

One day while she's observing the yummy mummies from the sidelines she comes up with a plan, it's not foolproof and it's only after she's carried it out she realises that there were a few things that she hadn't given enough thought to but she'll do it better next time because there will be a next time, she has a goal and she's not giving up until she reaches it.

Over a short period of time Drea is caught up in something much bigger and she's fast becoming the centre of attention. As the story unfolds we find out more about Drea's past and the reason's behind her drinking, her habit of always having tablets close to hand and her paranoia all become clear but slowly we see her taking her responsibilities more seriously and getting her life together.

Anoushka Beazley has written a debut novel of outstanding quality and has created a character that I wish I knew in real life. This isn't just a book full of wit and satire though as there are more serious issues of mental health, parenting, drugs and friendship to list a few, which are all sensitively dealt with and making this a very satisfying read. It's also wonderfully descriptive and her attention to detail is second to none. Being a book blogger I've read lots of books over the last twleve months and it's fast approaching that time when I start thinking about my top ten books of the year and I think it's pretty safe to say that The Good Enough Mother will be on this years list. I loved it and I'm sure lots of you reading this will love it too so why not give it a try? I can't wait to see what's coming next from this very talented author.

I'm delighted to welcome the author, Anoushka Beazley, to my blog today and she's got ten interesting facts about her debut novel for you. But first let me introduce you properly.


Anoushka Beazley has a film degree, an acting diploma and a masters in creative writing. She is a full time novelist, lives in North London with three little witches, a lawyer and a Maine Coon.


Ten things you didn't know about The Good Enough Mother


‘Gatlin’ was an homage to the town of the same name in the eighties horror movie Children of the Corn. I grew up watching horror movies inappropriately given to me at thirteen by my father’s friend who owned a video shop where we lived. Curtains drawn, Malechai, Michael Myers, Leatherface are characters I associate with childhood.

However, up until the very last few drafts the town had been named Northwood until I discovered that this was a real place in England, with real people, perhaps even a school and a park, so I changed the name.

All the callers on the radio show ‘Abigail in the morning’ are named after characters in the Arthur Miller play The Crucible. I have always been fascinated by the Salem witch trials and by how fearful people can be of feminine power, how witch hunts can so easily manifest through fear of difference and even jealousy, and I find it doubly interesting that Miller was at one time married to Norma Jean, or rather Marilyn Monroe, the epitome of the femme fatale.

The title ‘The Good Enough Mother’ is also the name of a psychotherapeutic theory coined by English paediatrician and psychoanalyst Donald Winnicott in the fifties who died the same year and date, 1971, 28 as I was born. I completed a foundation certificate in Psychotherapy where I was first properly introduced to Winnicott and his theories which I felt at the time quite angry towards but understood much better when I became a parent myself.

My youngest child is called Alabama. I love the name and discovered an actress from a show I adored called Sons of Anarchy about a motorcycle gang had also named her daughter Alabama. The actress’ name was Drea de Matteo, and so my protagonist found her name.

The quote which opens Part 2 was discovered long before the novel had even been written. Criminal Minds, one of my favourite shows, open and close each episode with a quote, and that one was kept on ice until the time was right.

All narrative pertaining to criminal activities, from marijuana possession to canine saliva. were checked and verified with an ex-police detective.

The novel was not structured in advance and, apart from Drea and her first night-time park activity, the plot and characters emerged organically as the novel was written.

Wattalapan is my favourite pudding.

My father, who passed away in 2012, and in his nursing home loved watching Tamil movies, The New Adventures of Superman while cooking beautiful Sri Lankan curries. He used to have a stack of five or so books by his bed on the go at any one time. Some of these books appear in earlier drafts but did not make it to the final edit. No Orchids for Miss Blandish by James Hadley Chase, a seminal film noir, was one he read and re-read. Wherever he is reading now I hope he’s added The Good Enough Mother to that pile.

If you'd like to know more about Anoushka Beazley you can find her using the links below:

Finally, if like me you're curious about the pudding Wattalapan you can find a recipe for it here.

I'd like to say a big thank you to Anoushka for stopping by today and for the review copy.