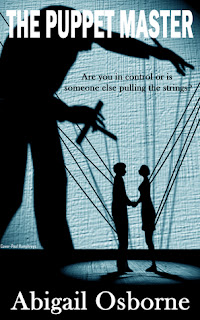 I'd heard so many good things about The Puppet Master that when author Abigail Osborne asked me if I'd like to read and review it for her to go alongside a guest post I just had to accept.

When Adam seemingly accidentally bumps into Bille again she can feel her defences wavering but she's determined not to let him in no matter what but Adam's not about to give up on her anytime soon.

Don't click away just yet though as I'm thrilled to have Abigail herself here on The Hippo today to talk about what's she's learned since self-publishing her debut novel.

Abbie was born in the Lake District and has moved all around the UK since then until she met her husband at University. She lives with him and their two crazy cats in the West Midlands. She is a Needs Assessor for students with disabilities and has her own book reviewing blog called Many Books, Many Lives. Even though she did English Literature at University it wasn’t until she started reviewing books that she realised how much she loved to write. The Puppet Master is her debut novel but it certainly won’t be her last.

10 Things I have learned since writing The Puppet Master

1. I have learned that I am actually good at something. The responses I’ve had to my book have filled me with such confidence. Since I finished University four years ago, I’ve been wandering around lost. I didn’t know what I wanted to do and what I might be good at. Writing this book has given me a sense of direction, and I know now what I can do when I put my mind to it.

2. I have learned that Self-Publishing is very hard. I didn’t have the confidence at the time to submit to publishers, and so I thought that self-publishing was the easiest thing for me to do. It really wasn’t. I can be proud that I’ve done it myself but it is a constant struggle every day as I can write but I am not good at Marketing. This side of writing a book is very hard. But I’m learning each day how to do it.

3. I have also learned that there is a certain stigma around people that self-publish. It is near on impossible to get your books in Bookshops. Because anyone that wants to write and publish a book can, it is very hard to be a big success when you are an ‘indie.' Luckily, I haven’t met many people that have tarred me with this brush, and most people I have met have given my book the time they would give to a ‘traditionally’ published book.

4. I have learned that the book reviewing community is awesome. For me, publishing this book has been putting my inner most thoughts and feelings out into the world. But it hasn’t been as hard as I thought because of the book reviewing bloggers that have supported me in doing this.

5.I have learned that writing is addictive. I’ve unlocked something in me that makes everything I see material for my next story. I am always stopping the car to take pictures of scenery I want to include in my next book.

6.I have learned that I need to be alone to write. I can’t do it when anyone is near me.

7.I have learned that when someone says ‘I have read your book’ it is guaranteed to make me smile and want to jump for joy.

8. I have learned that I couldn’t have published my book without the support and love of my friends and family, but especially my husband.
.
9. I have learned that it is very hard to make the money back that you invest in writing a book. So you shouldn’t write one book and expect to make your money back. It is entirely luck based as to what will take off and sell lots of copies. So writing a book for mercenary reasons will lead to disappointment. That’s just my opinion, though. I wrote my book for the sense of achievement, to see if this was something I could be good at. Hopefully, one day I’ll get a return on my investment. But the self-confidence I have gained is the best thing that could have happened.

10. I have learned that writing is what I will be doing for as long as I can. It can be challenging because sometimes it is hard to keep motivated and keep confident. But I relish the challenge, and it is more rewarding than I could have possibly imagined.

I for one hope that Abbie writes more as I can't wait to hear what other stories she's got to share!

If you'd like to connect with Abbie you can use the links below:

I'd like to say a big thank you to Abbie for stopping by today and for the review copy of The Puppet Master, it's been an absolute pleasure 😉