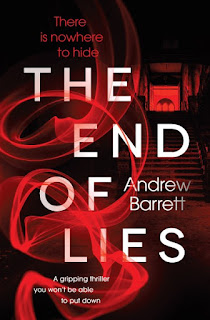 I'm always on the look out for new authors to read so I was delighted to be offered a copy of The End of Lies by Andrew Barrett as part of the blog tour.

Becky returns home to find her husband, Chris, lying dead on the floor and men ransacking their house, looking for something that they are clearly prepared to kill for. Lucky to escape as she's chased by one of the intruders, Becky then sets out to try and unravel the mystery surrounding her husband's death.

As if losing her husband wasn't bad enough, when Becky finds out who is responsible for Chris' death things get even worse for her as she has to hand over something to some very unsavoury characters within a week or she'll end up going the same way as her husband and she has no idea where to find it. No pressure then!!

The End of Lies is a book that starts off at breakneck speed and it carries on at that pace until towards the end when Andrew Barrett ups the pace a few more notches! The story cleverly flits from past to present, giving little glimpses into Chris and Becky's relationship as well as with her best friend Sienna. Nothing and no-one are what they seem and just when I thought I'd got a handle on who was lying and who was telling the truth I had the rug well and truly pulled from underneath my feet. This book is full of more red herrings than Billingsgate Market (yes I know they're not actual fish, I'm just using it as a comparison!) and it certainly lives up to it's strap line of being a gripping thriller that you won't be able to put down. If this book is anything to go by then Andrew Barrett is a talented writer and I'm looking forward to checking out his other books in the not too distant future. 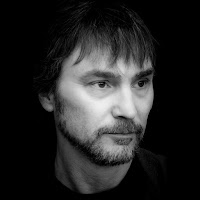 Andrew Barrett has enjoyed variety in his professional life, from engine-builder to farmer, from Oilfield Service Technician in Kuwait, to his current role of Senior CSI in Yorkshire.

He’s been a CSI since 1996, and has worked on all scene types from terrorism to murder, suicide to rape, drugs manufacture to bomb scenes. One way or another, Andrew’s life revolves around crime.
In 1997 he finished his first crime thriller, A Long Time Dead, and it’s still a readers’ favourite today, some 120,000 copies later, topping the Amazon charts several times. Two more books featuring SOCO Roger Conniston completed the trilogy.

Today, Andrew is still producing high-quality, authentic crime thrillers with a forensic flavour that attract attention from readers worldwide. He’s also attracted attention from the Yorkshire media, having been featured in the Yorkshire Post, and twice interviewed on BBC Radio Leeds.

He’s best known for his lead character, CSI Eddie Collins, and the acerbic way in which he roots out criminals and administers justice. Eddie’s series is four books and two short stories in length, and there’s still more to come.

Andrew is a proud Yorkshireman and sets all of his novels there, using his home city of Leeds as another major, and complementary, character in each of the stories.

You can find out more about Andrew, his books and connect with him using the links below:

Follow the rest of the blog tour on these fantastic blogs: 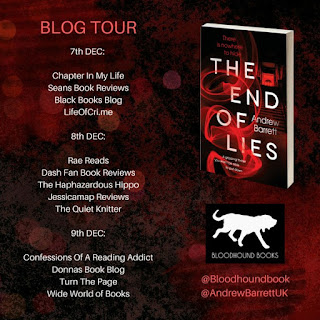 With kind thanks to Bloodhound Books for the review copy.