#Blog Tour - You're Next - Michael Fowler 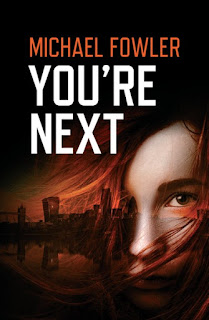 Today I'm the last stop on the blog tour for You're Next by Michael Fowler. This is the second book in the DS Scarlett Macey series but don't worry if, like me, you haven't read the first one of the series, Scream You Die, as it works perfectly as a standalone novel.

DS Scarlett Macey has been looking forward to her day in court with James Green, also known as 'The Lycra Rapist', who has been charged with a series of brutal rapes but the case collapses after an incident involving their only witness. Convinced of his guilt, she's furious and sets out to get him to ensure that he pays for his crimes.

But James is also busy, plotting his revenge against the people who he feels have done him wrong. Which one of them will reach their goal first?

I thoroughly enjoyed reading You're Next, with it's cleverly interwoven plots, short, snappy chapters and realistic characters. I loved Scarlett, determined to get her man, despite lacking the support of her superiors, but fully supported by her team, especially DC Tarn Scarr.  As for James, he literally made my skin crawl every time he appeared, he was evil personified, determined to ensure that no-one was going to catch him at whatever cost. It's clearly evident that Michael Fowler has a wealth of knowledge and experience within the police force as the procedural details in the book were exceptional.

If you like gritty and believable police procedural/thrillers then this fast paced, action packed book could be just the one for you and I definitely recommend that you give it a try. 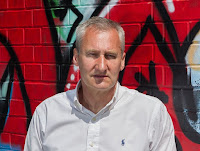 Following retirement, after thirty-two years as a police officer, working mainly as a detective, Michael returned to the deadly business of murder, as a writer. His past work brought him very close to some nasty characters, including psychopaths, and gruesome cases, and he draws on that experience to craft his novels: There is nothing gentle about Michael’s stories.

His landmark novel Heart of the Demon, published in 2012, introduced Detective Sergeant Hunter Kerr. Michael has since written five novels and a novella featuring Kerr.  He also released the first DS Scarlett Macey book in 2016. Michael is also the author of a stand-alone crime novella and a true crime thriller.

Michael has another side to his life – a passion for art, and has found considerable success as an artist, receiving numerous artistic accolades. Currently, his oil paintings can be found in the galleries of Spencer Coleman Fine Arts.

He is a member of the Crime Writers Association and International Thriller Writers.

You can find out more about Michael and his books on his website.

Although I'm the last stop on the blog tour you should check out what these other fantastic bloggers thought of You're Next. 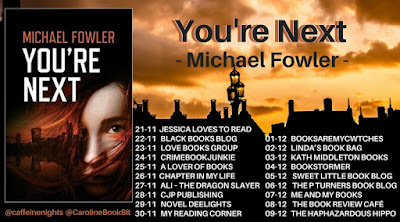 With kind thanks to Caroline at Bits About Books and Caffeine Nights Publishing for the review copy.